A tiny bird-like dinosaur with long legs and muscular, clawed arms was quite the night owl. Shuvuuia deserti lived around 75 to 81 million years ago and not only had remarkable hearing, but also well-honed night vision – much better than that of other dinosaurs and most modern birds.

This odd creature was first discovered in the mid-1990s, but a new analysis of its inner ear bones shows that it may have been a nocturnal hunter, like modern owls.

Jonah Choiniere at the University of the Witwatersrand in South Africa and his colleagues analysed 3D scans of S. deserti’s inner ear and found that it had a very large lagena, a structure responsible for hearing. The larger the lagena relative to the skull, the more sensitively an animal can hear – and this one was bigger than researchers had ever seen in a dinosaur.

“When we stumbled onto this structure, it just immediately prompted all these questions,” said Choiniere. He and his team compared the dinosaur’s inner ear with those of more than 100 species of modern birds.

They found that the only bird with a lagena even approaching the same size as S. deserti‘s was the barn owl (Tyto alba), a nocturnal hunter with extraordinary hearing and night vision. If S. deserti has such sensitive hearing, they wondered, how well could it see? 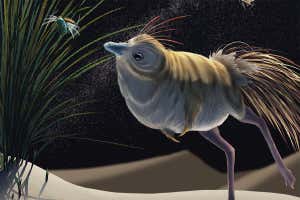 The researchers then examined 3D scans of skull fossils of S. deserti, including an eye structure called the scleral ring, which gives clues as to how well an animal can see at night. It turned out that the animal seems to have had fantastic night vision.

“Studying the past really requires studying the present, too,” said Choiniere. “The biodiversity we see today is an extraordinary window to the lifestyles of animals from long ago.”

More on these topics: