ESPN’s lead Bundesliga commentator Derek Rae looks ahead to an intriguing Dortmund vs. RB Leipzig “doubleheader” over the next week, a pair of games that will play a huge part in the story of this German football season.

Saturday, May 8 and Thursday, May 13: Circle these days on your football calendar. It’s not often we get served up two tantalising games in such a short pace of time involving two of Germany‘s lead protagonists. That their meetings land in different competitions only adds to the spice and intrigue.

In reality, Saturday’s Bundesliga encounter in Dortmund — watch LIVE on ESPN+, 9.30 a.m. ET (U.S. only) — is far more important for the Schwarzgelben than it is for Leipzig. Yes, the visitors are not strictly out of title contention — they’re seven points behind Bayern Munich with three games remaining — but it’s only a matter of time before the Bavarians make it official. Leipzig likely wouldn’t be averse to getting the one point needed to make certain of a Champions League place for a fourth time, though.

Derek Rae, ESPN’s TV voice of the Bundesliga, brings us his weekly columns on why Germany, its language and its football are part of his identity.

Dortmund, on the other hand, have reeled off four successive league wins (five in all domestic competitions) and are making a bold push for Europe’s premier competition, something that seemed well out of reach after they lost at home to Eintracht Frankfurt in early April. BVB have almost no margin for error: they’re still outside the top four, one point behind Eintracht Frankfurt and two behind Wolfsburg.

Both sides are desperate to get their hands on a trophy, in Leipzig’s case for the first time. Julian Nagelsmann, already confirmed as Bayern’s new boss for next season, is under no illusions as to what’s expected of him by the RB bosses before his departure.

Dortmund have similar obligations and ambitions. They’ve not claimed any silverware since 2017. That year, under Thomas Tuchel, it was the Pokal (“der Pott“) at the expense of Eintracht Frankfurt. Success is long overdue in such a passionate, emotional football city.

Breaking down the games

The stage is set for two epics, but each will have its own distinct, dramatic feel. There will probably be differences in terms of some cast members, given injuries and the need to try a variety of tactical looks.

Leipzig might be nine points and three places ahead, yet you can make a compelling case for Dortmund as favourites in both matches. They’ve only twice lost to the men from the East while winning five times overall, and Nagelsmann has had something of a BVB problem since taking over the reins in Sachsen nearly two years ago, gathering just a solitary point from three matches.

Haaland, center, was instrumental in Dortmund’s last win over Leipzig in January, and BVB will need him to be prolific again if they’re to finish in the top four and also win the DFB-Pokal. Jan Woitas/picture alliance via Getty Images

In the earlier Bundesliga meeting back in January, Dortmund outplayed and outfought Leipzig in the second half, prevailing 3-1. They did it despite allowing their hosts plenty of the ball, pouncing eagerly, efficiently and opportunistically on the counter. Erling Haaland scored twice that day, and Dortmund’s template for success undoubtedly revolves around the formidable Norwegian. That is assuming he has fully recovered from a dead leg suffered in the hugely important 2-0 win away to Wolfsburg. Haaland netted both goals in that colossal contest against Dortmund’s direct Champions League rivals.

Dortmund’s defence has visibly stabilised in recent weeks. They do have an issue at right-back, though: the talented Mateu Morey will be on the sidelines for months after a bad knee injury in the Pokal semifinal “Kantersieg“(German word for runaway win) over Kiel. Thomas Meunier, who was signed to be first choice in that position, has underwhelmed, and so it will be left to 35-year-old Lukasz Piszczek, in his final season, to pick up the torch. 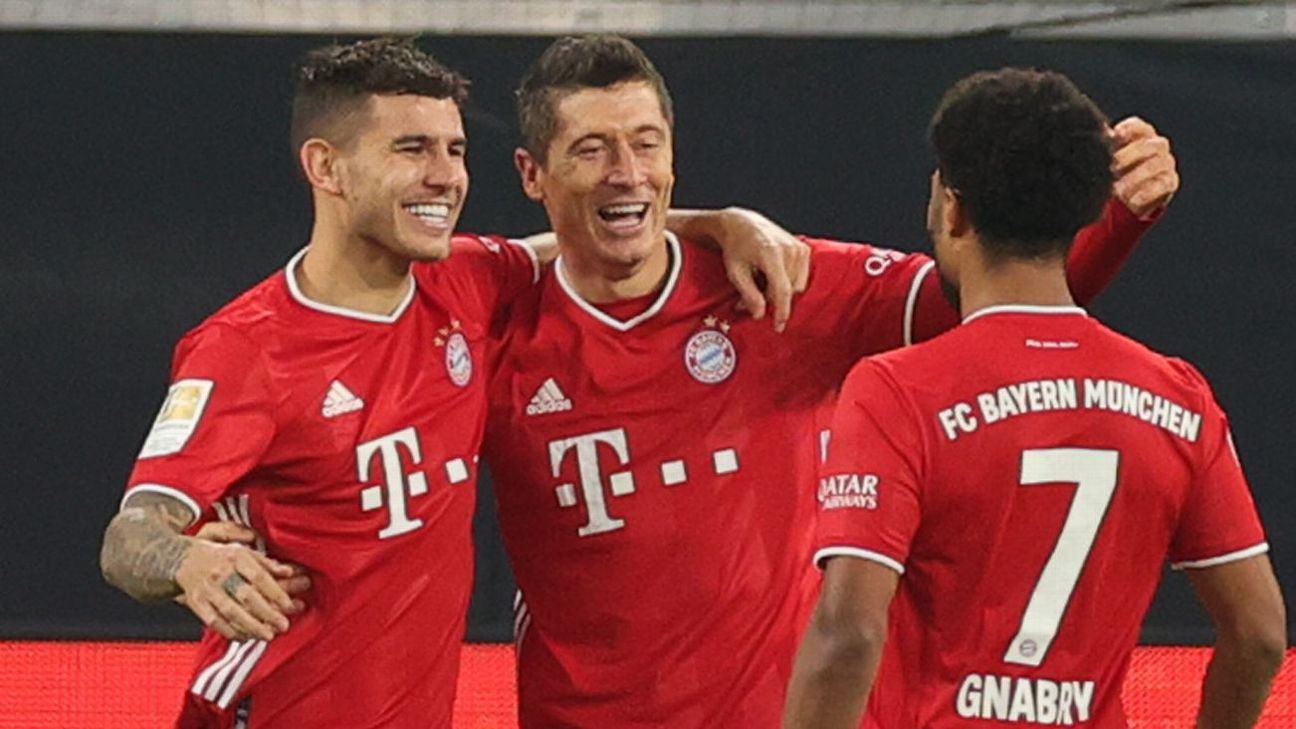 Germany’s top division is on ESPN+. Can Bayern Munich stay on top, or will the likes of Borussia Dortmund and RB Leipzig take over?
ESPN+: Live games and replays (U.S. only)
Bundesliga home | Schedule | Standings

Jude Bellingham would be playing this weekend, but for a red card in the Autostadt. Mo Dahoud, who has flourished under interim coach Edin Terzic, and Emre Can are more than capable of excelling in central midfield. Bellingham will return for the cup final on Thursday.

For Terzic, who impresses most with his intelligence and demeanour, these high profile games represent a “shop window” of sorts. He is due to remain on staff as one of Marco Rose’s assistants when the Gladbach manager arrives this summer, but other clubs are watching and waiting. Once you get a taste of being a coach in your own right, can you easily give that up?

Whereas Dortmund must throw everything into both matches. Leipzig can more afford to save the winning hand for the DFB-Pokal. For one thing, you don’t want to show your full tactical hand when it’s not completely necessary. For another, this has been a long season, and it’s natural to want to use the squad as much as possible when there are three games in eight days.

For example, Nagelsmann is without Tyler Adams and Christopher Nkunku on Saturday, but hopes to have them ready for Berlin. Leipzig boast a large squad with flexible, movable pieces, and there are no other casualties among the regulars at the time of writing.

Leipzig have wobbled a bit of late. In their last five Bundesliga matches, they’ve won twice, drawn once and lost twice; one of those defeats came against Bayern, but the other was a shock against relegation-threatened Koln.

Nagelsmann’s preference is for possession football, but there is a calculation to be made in these two games about whether that’s the way to beat Dortmund. Leipzig have shifted slightly, but noticeably, from their counter-pressing preferences, although we can perhaps expect a return to their “roots” when Jesse Marsch takes over the reins in the summer.

Spaniards Angelino and Dani Olmo are players who really enhance Leipzig, albeit in different ways. The former is important with his non-stop driving runs on the left and crossing; the latter with his high skill level and ability to attract the attention of more than one opponent at a time.

There is still a bit of a void in the centre forward position. Yussuf Poulsen, who has been with Leipzig since their days in the third tier, remains the more reliable bet for me and is the ultimate pressing machine. Alexander Sorloth’s form has improved and while he offers lightning pace, his overall returns have been a disappointment.

So, Dortmund or Leipzig with much at stake. Take your pick. Anyone who thinks German football is only about who wins the Meisterschale might want to reconsider and tune in.