SANTA CLARA, Calif. — By the time the San Francisco 49ers drafted Trey Lance as their future franchise quarterback with the No. 3 pick of 2021 NFL draft, coach Kyle Shanahan had received some variation of the same question for more than five months.

Will Jimmy Garoppolo continue as the starting quarterback of the Niners in 2021?

For now, it seems the answer is yes.

“It’d be very hard for me to picture a situation where Jimmy’s not here,” Shanahan said. “Because that would be, I think, very stressful for us, because Jimmy’s a very good player and I think we can win with him. So we’ll play that [quarterback competition] by ear, but I expect Jimmy to be here and I’d be surprised if he wasn’t.”

If that answer sounds similar to the one Shanahan gave almost every time he was asked the question before, it’s because it is. But much has happened since Shanahan first said, “I expect Jimmy to be our starter next year,” on Nov. 17 of last year.

Garoppolo has not played a game since and the 49ers made a franchise-altering trade with the Miami Dolphins on March 26, sending the No. 12 pick as well as first and third-round choices in 2022 and a first-round selection in 2023 in exchange for the No. 3 pick in this year’s draft.

Naturally, that trade again cast doubt on Garoppolo’s future in San Francisco, which reached fever pitch on April 26 when Shanahan bungled what was meant to be a playful interaction with a reporter. When asked whether Garoppolo would still be on the team the day after the draft ended, Shanahan said, “I can’t guarantee that anybody in the world will be alive Sunday, so I can’t guarantee who will be on our roster.”

Shanahan acknowledged he “bombed” that answer to the point he immediately called Garoppolo to explain. Indeed, Garoppolo was not only alive but still on the roster come Sunday.

It doesn’t appear that’s going to change any time soon.

“We made this move, it’s obvious what I hope and what I believe in with this guy coming in,” Shanahan said of Lance. “But it would be a very tough situation if Jimmy’s not on our team.”

Trading Garoppolo would also mean the 49ers need a better veteran option at backup behind Lance. Such options aren’t exactly abundant and a quarterback room consisting of Lance, Nate Sudfeld and Josh Rosen or Josh Johnson would be a massive step down in experience from the Garoppolo, Nick Mullens, C.J. Beathard triumvirate of last year.

Even if San Francisco wanted to trade Garoppolo now, there aren’t any obvious landing spots and Garoppolo’s value is at a low point following another injury. The New England Patriots and Chicago Bears, two logical landing spots before the draft, selected quarterbacks in the first round. The Denver Broncos traded for veteran Teddy Bridgewater to go with Drew Lock.

Even if there was a suitor, the Niners would need Garoppolo’s approval because of his no-trade clause. And if Garoppolo agreed to a deal, his contract would almost certainly need to be reworked to lower his $24.1 million base salary for 2021. There’s been some thought the Niners might want to lower that number by doing a basic restructure or rework and guaranteeing a chunk of it.

General manager John Lynch and Shanahan got permission from 49ers ownership to carry Garoppolo and Lance’s salaries this year (an estimated $32.6 million in cap space) before trading up for the third pick. “It was I think a testament to the commitment of our ownership,” Lynch said. 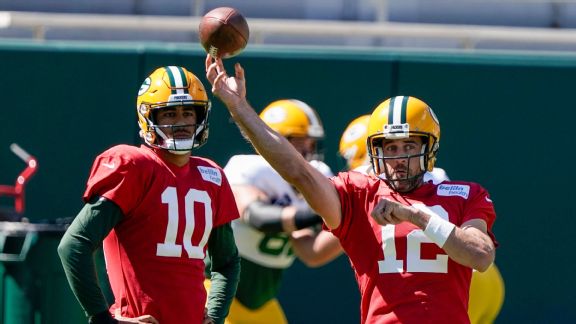 Unless the Niners find themselves in a cap crunch — they have about $18.3 million in cap room before signing the rookie class, according to OverTheCap — or have an opportunity to acquire a high-cost player they can’t resist, restructuring Garoppolo’s contract won’t be financially driven.

“We arrived at a point where that was our preference to draft a quarterback and keep Jimmy,” Lynch said. “Provided that someone didn’t come and just completely blow us away.”

For what it’s worth, the 49ers don’t believe Lance is as far away as outside perception would lead you to believe.

At some point, the 49ers and Garoppolo will part ways. It could be in the coming months after the Niners get a closer look at Lance. It could be just before the season or during it if there’s an injury elsewhere (a la the Eagles trading Sam Bradford to the Vikings after Bridgewater’s injury in 2016). Perhaps it won’t happen until 2022.

Regardless, Lance and Garoppolo seem fairly comfortable with the current setup, a good sign for the Niners given the possible repercussions of a looming quarterback controversy. Lance told Lynch after the Niners drafted him, Garoppolo was one of the first people to reach out.

“I know this coaching staff and the guys in the quarterback room are going to push me and help me compete and help me learn,” Lance said. “That’s the biggest thing I’m looking forward to.”