AT&T (NYSE:T) took on Netflix (NASDAQ:NFLX) and other video streaming rivals with the launch of its HBO Max service last year. But any comparison between Netflix and AT&T requires a look into how AT&T’s streaming service fits into its larger telecom business.

Through this lens, is AT&T a better stock buy than Netflix? Here’s how the telecom titan stacks up against the streaming entertainment pioneer.

With the U.S. telecommunications market at a saturation point, AT&T and its competitors are forced to snatch customers from one another to grow subscribers. Holding on to its customers is AT&T’s top priority, and as CEO John Stankey said, “HBO Max is the key here.”

By bundling telecom services with HBO Max, AT&T hopes to retain customers while enabling the company to capture a higher average subscription price. To this end, AT&T shook up the entertainment industry last December by announcing plans to release its WarnerMedia-produced theatrical film slate to HBO Max at the same time it releases them to theaters in 2021.

Its fourth-quarter results suggest the strategy is having an impact. AT&T experienced growth in postpaid subscribers, the telecom industry’s most valued customers, for the second quarter in a row. AT&T added 1.2 million postpaid customers, the highest net adds in some time. It combined this growth with the second-lowest quarter of postpaid phone churn in the company’s history. It also doubled the number of fourth-quarter HBO Max subscriptions over the previous quarter.

But despite these promising trends, AT&T has struggled since the pandemic struck. The company’s 2020 full-year revenue dropped to $171.8 billion from 2019’s $181.2 billion.

The diminished revenue hurt the company’s efforts to pay down a massive debt load accumulated to acquire Time Warner (which included HBO) and DIRECTV. The latter is like an anchor dragging on AT&T’s operations as the service bleeds subscribers.

The financial impact was perhaps most apparent when the company failed to raise its dividend in 2020 after 36 consecutive years of dividend increases. Its high-yield dividend is one of the key reasons investors are attracted to the stock. 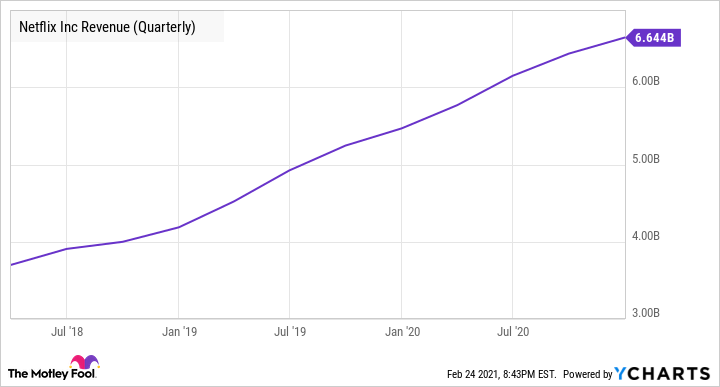 The trend continued through the company’s most recent quarter. Netflix enjoyed a strong fourth quarter, with paid subscription memberships rising 21.9% year over year.

Membership growth was helped by pandemic-induced stay-at-home restrictions, but when you dig into the numbers, it’s also the result of a successful strategy. Netflix invested in content attractive to an international audience. The company developed original programming in German, Korean, Spanish, and other languages.

As a result, Netflix’s member growth was powered by international adoption. Of its 2020 net additional memberships, 83% came from markets outside North America. Even better, these local titles also possess global appeal. Its French-language heist series Lupin was a hit around the world, ranking second in Netflix’s top 10 in the U.S.

This strategy bodes well for its ability to continue capturing subscriber growth and revenue. Moreover, CFO Spencer Neumann indicated the company turned a corner and expects to break even on a cash flow basis this year and be cash flow positive from 2022 onward.

Despite the successful strategy, Netflix lost market share as more competitors entered the fray. As co-CEO and chief content officer Ted Sarandos says, people have tremendous appetites for great entertainment and are willing to pay for more than one streaming service to get the content they want.

At this point, Netflix is the better buy. Its consistent revenue and subscriber growth, steady path toward being cash flow positive next year, and resilience in the face of fierce competition are all factors making it a justified part of the FAANG gang.

AT&T, meanwhile, must spend years reducing its debt. This and its substantial dividend payouts, totaling nearly $15 billion in 2020, hamper the company’s ability to invest in its business.

So for now, Netflix is the clear winner in this comparison.