Growth stocks might grab headlines and excite the market, but sometimes they end up deflating just as quickly as they climbed. In contrast, value stocks are perfect for cautious investors because they tend to have business models that have stood the test of time.

So when a value stock grows consistently quickly, it’s a sure sign of a winning company worth buying. Today, I’ll be looking at three such stocks, all of which are selling evergreen products and making their shareholders richer in the process.

Since the start of the pandemic, Retractable Technologies (NYSEMKT:RVP) has been on a tear. You’ve probably never heard of it, but if you’re vaccinated, there’s a chance that one of the company’s retractable safety needles was used for your jab. And that’s also why Retractable’s trailing-12-month (TTM) revenue has grown by a startling 93.19% over the last year.

The U.S. government is one of its biggest customers, and business shows no sign of slowing down, at least not until everyone is vaccinated. In the first quarter, revenue increased more than 484% year over year thanks to the U.S. Department of Health and Human Services’ demand for needles for mass vaccination campaigns. What’s more, in late May, the government requested that Retractable increase its manufacturing capacity by at least 50% — and invested $27.36 million in the company to help make it happen.

It’s generally good news for a company when a major customer is willing to pay to increase its output so that it can buy an even larger volume of its product in the future. So for the next few years, it’s highly likely that Retractable will continue to grow rapidly like it has over the last year and a half. 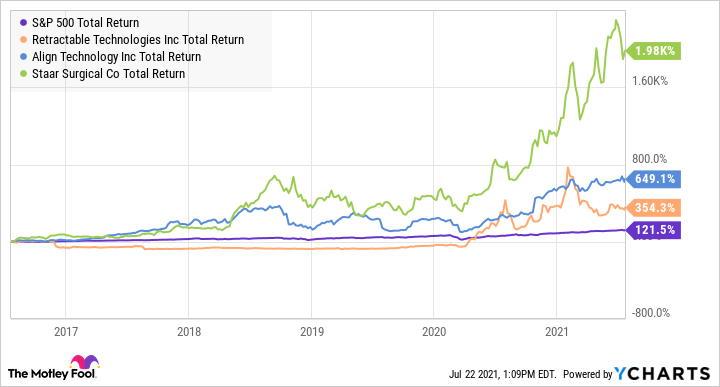 If you think that staring at computer screens all day long has made your vision a bit worse, you aren’t alone, and Staar Surgical (NASDAQ:STAA) has a solution for you. Its implantable refractive lenses correct people’s vision like glasses or contact lenses, but they don’t need to be removed at the end of the day like contacts, or handled meticulously to avoid smudging the glass. And as the ranks of the nearsighted grow as a proportion of the population over time (blame our screen-obsessed lifestyle), so will Staar’s addressable market, which it expects will encompass more than half the population by 2050.

The trend of people having increasingly poor vision is nothing new, and Staar has been positioning itself as a leader in implantable lenses for a long time. Over the last five years, its trailing-twelve-month revenue increased by more than 120%. In the first quarter of 2021, it smashed its records for quarterly net sales, growing 44% compared to 2020 and bringing in a total of $50.8 million.

Even with more growth anticipated in the coming years due to penetration of its international markets in the EU and China, shareholders probably don’t need to worry about margins slipping. The company plans to continue to push its consistently rising gross margins even higher, going from just above 70% in 2017, to 74.6% in 2020, to above 80% in 2022. Between increasing efficiency and increasing sales, Staar will keep being a great stock to own. 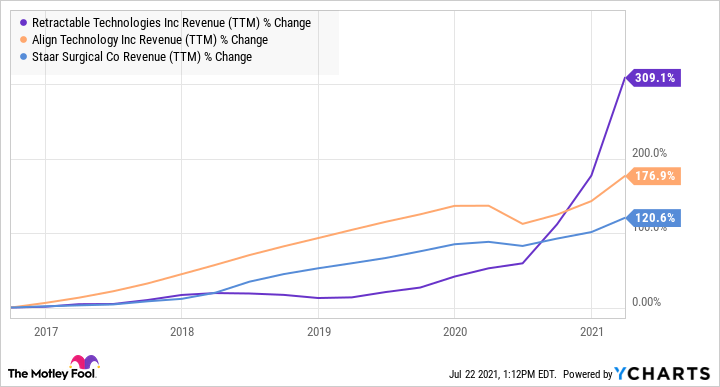 If you haven’t seen many people wearing dental braces in the last few years, Align Technology (NASDAQ:ALGN) is probably part of the reason. Its invisible tooth straighteners are increasingly popular among consumers who don’t want the aesthetics or pain of the traditional dental alignment devices. Offering an effective but low-profile solution to an extremely common dental problem means that Align can get people who wouldn’t usually opt for teeth straightening on board as customers.

Over the last decade, its trailing revenue grew by 534.6%, thanks in part to its market share of 29% in the adult segment. The company also has 5% of the market for tooth straightening for teens, who are the more-traditional target customers. In the first quarter of 2021, controlling its share of these markets worked out to be $894.8 million in total revenue. That’s a 62.4% increase compared to the same quarter in 2020.

Management expects its success at the start of the year will contribute toward reaching total revenue of up to $3.9 billion for all of 2021. If Align’s push into new international markets works as well as what it’s been doing, its growth might even accelerate next year, and that’s what makes it an exciting value stock.

How to Download Shows and Movies from Hulu | Digital Trends

‘An Arm and a Leg’: They Turned Grief Into Action
8 mins ago

‘An Arm and a Leg’: They Turned Grief Into Action

Evergrande contagion leaks into bond funds in Europe and US