(Bloomberg) — New York City said four or more Covid-19 cases in a school in a week will result in a 10-day closing, up from a two-case rule. Senior housing occupancy reached a record low in the first quarter in the U.S., even as vaccination rates rose and coronavirus infections ebbed.

Florida said it is suing the federal government to allow cruising to return in the U.S., more than a year after the industry went on hiatus. The world’s biggest online travel agency is in favor of vaccine passports that would make it safer and easier for people to travel.

Brazil reported a record 4,249 deaths. India is attempting to boost its capacity to make vaccines, Prime Minister Narendra Modi said on Thursday, as new cases in the world’s second-most populous nation surged to a record.

Subscribe to a daily update on the virus from Bloomberg’s Prognosis team here. Click CVID on the terminal for global data on cases and deaths.

Brazil registered a record 4,249 deaths on Thursday, pushing the total to 345,025, the Health Ministry said. Confirmed cases rose by 86,652, totaling almost 13.3 million as the pandemic continues to worsen in Latin America’s largest country.

Butantan Institute, which is responsible for producing Sinovac vaccine in the country, had issues importing raw material from China, forcing it to temporarily halt its output. The material for the shot will arrive about 10 days later than initially expected, the institute said in a statement. Sinovac’s vaccine is the most used in the country.

President Jair Bolsonaro has argued against lockdowns, suggesting on Wednesday there’s little point because the virus is “here to stay.” A poll last week reported a 48% disapproval rating for his government, compared with 31% in October.

Wisconsin reported 1,046 new cases on Thursday, the most in almost two months. At least half the recent samples sequenced are one of five virus variants, and cases are growing fastest among those under 18 years old, said Ryan Westergaard, a chief medical officer of the state Department of Health Services, the Wisconsin State Journal reported. “We are in a new phase of the epidemic that is clearly worse than we were before, and it’s transmission among young people who are driving the change in the curve,” he said.

One-third of the state has received at least one dose of vaccine, and all people 16 and older became eligible on Monday.

Senior housing occupancy reached a record low in the first quarter in the U.S., even as vaccination rates rose and coronavirus infections ebbed.

Residency at assisted and independent-living facilities fell to 78.8% in the first three months of 2021, down 1.8 percentage points from the prior quarter and 8.7 percentage points from a year earlier, according to a poll of for-profit and non-profit managers by the National Investment Center for Seniors Housing & Care. The trend is a potential concern for investors in the industry’s debt.

Florida posted 7,939 new cases Thursday, the most since Feb. 11, according to state health department data. The seven-day average climbed to the highest this month. Still, Florida’s cases per capita are running just slightly above the national average and significantly below hot spot states such as New Jersey, New York and Michigan.

Governor Mike DeWine said that new infections in Ohio are “moving in the wrong direction” but “we can still turn this around” if more people get vaccinated. “We’re in a race. It’s a life and death race,” the Republican governor said at press briefing on Thursday.

He said Ohio crossed the threshold of one-third of those eligible having received the vaccine, and he said he was sending extra doses to areas with higher rates of virus variants. At the same time, the state reported 2,742 cases on Thursday compared with a 21-day average of 1,801, as hospitalizations and intensive-care admissions also increase. It was most new infections for three weeks.

Cleveland, Ohio, is on the Centers for Disease Control and Prevention’s list of 10 U.S. metro areas with an increased Covid-19 burden in the week to Sunday.

The University of Chicago is telling students living in its dorms to stay in their rooms beginning immediately through April 15 because of a large cluster of Covid-19 cases involving undergraduates. Classes for undergrads are moving to fully remote for seven days.

Many of these cases may have been connected to parties held by off-campus fraternities over the last week, Michele Rasmussen, dean of students and Eric Heath, associate vice president for safety and security, said in an email to students Wednesday. Tests in recent days have detected more than 50 cases involving students, including many living in residence halls.

“We are particularly concerned because of the high likelihood that these cases involve the B.1.1.7 coronavirus variant, which is currently widespread in the Chicago area, appears to spread more easily than other variants, and is able to cause more severe disease in people of all ages,” they said.

The Netherlands won’t administer the AstraZeneca Covid-19 vaccine to people under the age of 60 for the time being, Health Minister Hugo de Jonge said, according to a report on Dutch news agency ANP.

The Australian government said earlier it would guide against giving Astra’s vaccine to people under the age of 50, amid warnings of a link to a rare type of blood clots. Meanwhile, Portugal’s Directorate-General for Health said it recommends the Astra vaccine be used only by people over 60 years old.

A community vaccination site in a Denver suburb that closed Wednesday after 11 people who received Johnson & Johnson jabs fell ill has reopened. Colorado Governor Jared Polis said there “weren’t any issues” with the vaccines.

“Maybe they were dehydrated or scared of needles,” Polis said at a Thursday news conference. Two people were taken to a hospital for observation. The others received first aid at the site, including swigs of orange juice and water.

“The recovery here remains uneven and incomplete,” Powell told a virtual panel Thursday during the Spring meetings of the International Monetary Fund. The world won’t be able to fully resume economic activity until the virus is controlled everywhere, he said.

Florida Governor Ron DeSantis said the state is suing the federal government to allow cruising to return in the U.S., more than a year after the industry went on hiatus over the Covid-19 pandemic.

The step is the latest escalation in a squabble between the Centers for Disease Control and Prevention and the major cruise lines, many of which have their corporate headquarters in South Florida.

Slovakia and Russia clashed over the Sputnik V Covid-19 vaccine after the European Union member accused Moscow of delivering shots that were different from those used in a peer-reviewed study.

Russia rejected the allegations and demanded Bratislava return the 200,000 doses it sent. The dispute may set back efforts to use Sputnik widely in Europe. Slovakia was one of a few members of the bloc pushing to use the Russia-developed vaccine to help speed the roll-out of inoculations.

The EU has exported more than 80 million vaccine doses since the beginning of February, a document with updated data circulated among the bloc’s governments and seen by Bloomberg shows. A total of 112 million doses had been delivered to EU member states as of April 5, according to the memo circulated to diplomats in Brussels.

Japan has overtaken the U.K as the main export destination, getting 17.7 million shots produced in the EU, versus 13.3 million for shipment to Britain. European governments have been under pressure to curb exports as their rollout lags behind vaccination rates in the U.S and the U.K. However, out of the 534 export requests submitted by drugmakers so far, only one has been refused and two are pending, according to the memo dated April 8. 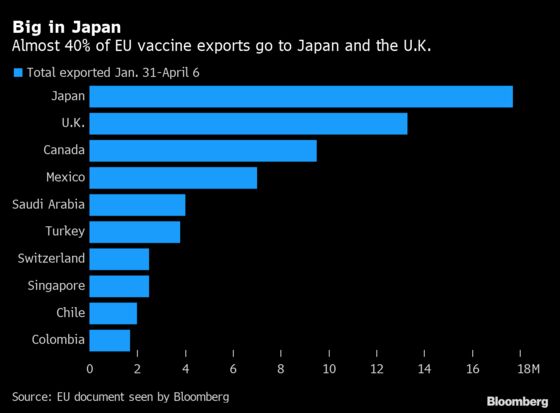 India is attempting to boost its capacity to make vaccines, Prime Minister Narendra Modi said on Thursday, as new coronavirus cases in the world’s second-most populous nation surged to a record.

Modi made the comments during a meeting with chief ministers to discuss ways to check the rapid rise of infections in the South Asian nation. Some states have said that they are facing a shortage of vaccines.

France met its target of inoculating 10 million people with a first dose of vaccine on Thursday, a week ahead of schedule, as the country endures its third lockdown.

France opened mass vaccination centers across the country this week in a bid to further accelerate the roll-out of the shots, in a campaign that started sluggishly after the first vaccine was administered on Dec. 27.

The world’s biggest online travel agency is in favor of vaccine passports that would make it safer and easier for people to travel.

“We need a way that tourists can go to a country but prove that they are safe to travel so that governments are willing to let people come,” said Booking Holdings Inc. Chief Executive Officer Glenn Fogel in an interview on Bloomberg Television Thursday. Fogel added that taking a test three days prior to traveling is “not the greatest system” and a “technological solution” is needed.

New York City said four or more Covid-19 cases in a school in a week will result in a 10-day closing, up from a two-case rule that had drawn criticism from parents.

Mayor Bill de Blasio said Thursday that the new rule will help provide a “more stable and consistent schedule” as the city tries to get more kids back into classrooms. A majority of New York City’s 1.1 million students continue to choose remote instruction. A final opportunity for them to switch to in-person class ends Friday.

The U.K.’s current road map out of lockdown for England could lead to an extra 15,700 deaths by next summer due to another wave of infections, according to modeling estimates from Imperial College London. “The magnitude of this wave is uncertain but should be lower than the previous ones, as long as the vaccine roll-out continues at high pace, with high uptake, and without immune-escape variants,” Neil Ferguson, an epidemiologist with the university’s school of public health, said.

Poland suffered its deadliest day of the coronavirus pandemic after fatalities from the Easter holiday were added to the tally. The number of reported deaths rose to 954.

The Roland-Garros Paris tennis tournament has been postponed by a week due to the epidemic, the organizers announced on Thursday following a decision from the French Tennis Federation. The tournament will now take place from May 24 to June 13. 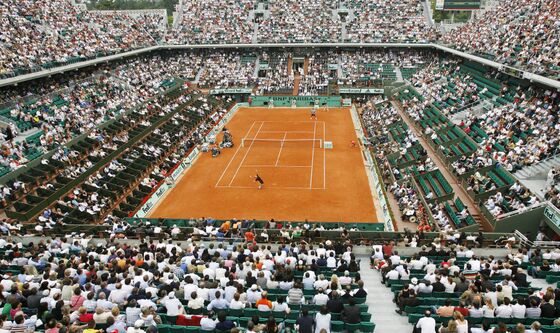